USA: The WFTU stands by the side of the workers of NABISCO Company 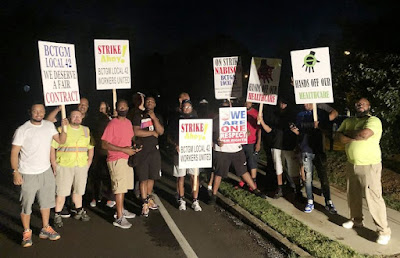 25.08.2021
The World Federation of Trade Unions, which is the militant voice of 105 million workers in 133 countries around the world, conveys its solidarity to the workers of Nabisco Company in the U.S.A. who are on strike in five locations: NABISCO distribution center outside Atlanta, as well as in Portland, Ore., Aurora, Col., Richmond, Va. and Chicago, Ill.
Nabisco workers in all five locations join voices and demand from the Company to stop exporting their jobs to Mexico and to end its demands for contract concessions.
The world class-oriented trade union movement stands by the side of NABISCO workers who fight from Oregon and Colorado to Illinois, Virginia and Georgia against negative changes in their contracts and working conditions. We urge for the fulfillment of their just claims and the protection of their working rights.
The Secretariat
Publicadas por Party of Communists USA a la/s 06:58 No hay comentarios.: 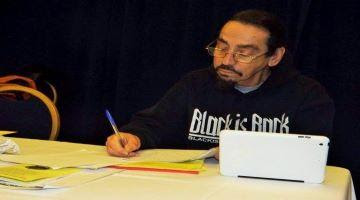 Glen Ford carried on his devotion to the liberation struggle until the end of his life.

It's easy to run with the herd, especially when it can bring possible career advancements and even significant monetary gain. That is why, for so many, making decisions to find a way into the mix, to play the game in order to advance one’s individual objectives, does not present any internal moral debate. It is just common sense.

But for the oppressed and their radical intellectuals and activists, accommodationism is not an option without surrendering one’s soul. Glen Ford and many of our generation refused to do that.

Glen made the decision to devote himself to being a truth teller on the side of the people back in the 1970s, at a historic moment when it was very easy to be an opportunist. Co-optation, an aspect of the state’s counter-revolutionary response to the new forms of Black radicalism that emerged in the 1960s, was an important element in the state’s repertoire. That along with, of course, systemic repression.

But Glen made a conscious decision to take, as Kwame Nkrumah framed it, a “revolutionary path.” That path is always more difficult, for not many take it. As a result, the path is quite narrow, no more than a trail through the forest of normalized reaction projected to the masses as supposed “common sense.” When one takes that path, very few accolades nor real economic stability, retirement funds or clear paths forward are available.

It might end with one laying in a hospital bed for two weeks, while furiously pounding out two issues of Black Agenda Report, suspecting they may be the last few you will have a hand in shaping and passing quietly on the morning the next issue was due to come out.

When I spoke with Glen a few weeks ago, before he entered the hospital, I intended to talk him into relinquishing some of his responsibilities with BAR, so he could concentrate on trying to extend his stay on this planet and with us. Yet, in the course of our comical banter about morality and the meaning of our lives—a discussion that can only happen when you know you are rapidly approaching the end of your journey—I never raised the issue of stepping back a little because Glen made it quite clear how he wanted to depart this earth. “Ajamu, I am going out struggling.” For him, BAR was his most significant contribution to the “struggle.” Even though he was not healthy, Glen was proud of the work the BAR team had developed and he was satisfied it was continuing.

I spoke with him again about a week later to give him another lame excuse as to why I wasn’t going to get an article to him that week. Unbeknownst to me, he had already been a week into his hospital stay. But he assured me he had been there before. Glen sounded good, so I didn’t really take note. Plus, BAR had come out and I had no reason to believe anything was out of the ordinary.

So, I was floored when, a week later, I got a text message from his daughter, Tonya. When I called back, I was somewhat relieved when she shared that he was still with us, even if he was not doing well. But two days later, he was gone.

Glen’s transition to an ancestor has left a huge hole in our movement, not to mention in the hearts of so many of us. He was the last of a kind. Someone who loved his people, who loved life and had enormous hope for the future. He said to me in our final conversation how happy he was to have lived long enough to bookend his life, starting with the uprisings of the 1960s that developed our belief that we could win, not yet realizing what the state and the system had in store for us to sustain itself. The other bookend brings us to today, where it has become absolutely clear we are seeing the end of global white supremacy and that he and BAR have been playing a role in bringing us closer to that conclusion every day.

The way we honor Glen and Abdusshahid “Baba” Luqman, another valued member of our community and beloved member of the Black Alliance for Peace, is to intensify our resistance. To re-dedicate ourselves to ending the organized barbarity that is the ongoing criminal enterprise known as the United States of America and its European colonial allies.

For Glen, we will continue to tell the truth, to engage without fear in the ideological battle for our people, and to build the structures that will lead us to the new world we must build.

Ashé, Brother Glen and Brother Luqman. Know that as long as we are also on this planet—and in opposition—there will be no compromise and no retreat of our forces.

Ajamu Baraka is the national organizer of the Black Alliance for Peace and was the 2016 candidate for vice president on the Green Party ticket. Baraka serves on the Executive Committee of the U.S. Peace Council and leadership body of the United National Anti-War Coalition (UNAC) and the steering committee of the Black is Back Coalition He is an editor and contributing columnist for the Black Agenda Report. He was awarded the US Peace Memorial 2019 Peace Prize and the Serena Shirm award for uncompromised integrity in journalism. 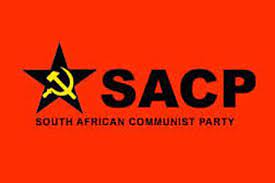 April 22, 2021 is considered as a date of great importance for all Russian and international communists around the world as it marks the 151st Anniversary of V. Lenin's birth.

The CPRF traditionally is used to widely celebrate this famous date.

CPRF members and parliamentarians, Komsomol and Party allies marched through the Red Square to lay wreaths and flowers at the Mausoleum of the Leader of the World Proletariat to pay him a tribute. Marching under red flags the column was headed by G. Zyuganov, the Chairman of the Central Committee of the Communist Party of the Russian Federation. Along with Russian participants in columns there were foreign guests from Cuba, Vietnam, Venezuela and Mexico.

Presenting a commemorative speech he stressed that Vladimir Lenin had been, indeed, one of the most brilliant philosophers, scientists and strategists on Earth.

He laid down the basis and guidelines of bringing our country to socialism which had resulted in creation of the Union of Soviet Socialist Republics – the first socialist state in the world. The world had been changed forever.

Today, Lenin's teachings are in demand more than ever as we witness great interest in Marxist-Leninist theory and practice throughout young generation. To meet modern requirements the CPRF has established an education center where it welcomes young communists and students from all over Russia and fraternal Parties.

Сommemorative events were held throughout the country. People pay their cordial tribute to the memory of the Great Revolutionary and Citizen of our country.

Long live the teaching of Lenin!!

Tough Hand with the Polar Group demand CUTV and FNLCT

CUTV and FNLCT demand a firm hand with the Polar Group

They express their solidarity with the workers of Alimentos Polar Marigüitar, in Sucre.

The Frente Nacional de Lucha de la Clase Trabajadora (FNLCT) and the Central Unitaria de Trabajadores de Venezuela (CUTV), once again, pronounce themselves in class solidarity with the workers at the service of the companies of Grupo Polar, where thousands of direct and indirect dismissals have taken place, with the bosses repeatedly disobeying orders of reinstatement issued by the Labor Inspectorates and ratified by the Judiciary.

In particular, we express our categorical condemnation of the serious labor law violations that have been committed in a sustained manner since 2017 at Alimentos Polar Planta Marigüitar, located in the Bolívar Municipality of the State of Sucre. In that work entity, labor immovability has been violated with the unilateral decision and without just cause to suspend 85 male and female workers, in conditions of great deterioration, constituting such fact an indirect dismissal. In addition, the aforementioned company blatantly violates the Organic Law of Prevention, Conditions and Environment of Work (LOPCYMAT) by throwing workers with occupational diseases out of work, refusing to comply with its obligations towards these colleagues who suffer serious health problems as a result of the conditions in which they have been working for many years.

Consequently, we urge the authorities of the Ministry of Labor, INPSASEL, the Attorney General's Office and the Supreme Court of Justice to act with forcefulness and determination to bring about labor justice and force the monopolistic employer of Empresas Polar to respect the laws and the Constitution. Enough of impunity, enough of labor defenselessness.

On the other hand, we make a fraternal call to all the workers who are victims of the massive and repeated violations of labor rights committed by the Polar Group, to unite and fight in an organized manner, with absolute independence from the bosses and the State, which must be forcefully demanded not to be an accomplice of the aberrations of this abusive and fraudulent employer.

Tough hand with Lorenzo Mendoza and his delinquent managers! Reinstatement for all the dismissed workers of the different companies of the Polar Group!

The united working class will never be defeated!

General Coordination of the FNLCT