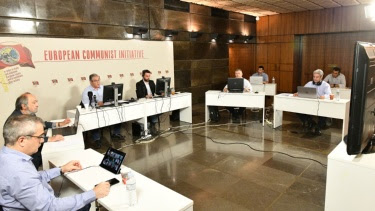 The importance of recording joint struggle goals.
Communists of different countries and regions may wage a struggle in every single country. There may be different approaches to issues of strategic importance. However,  the collective effort has its own importance and the fact that in joint statements the same goal is put forward: the overthrow of capitalist barbarism, the construction of a new socialist-communist society. Therefore, every possible form of cooperation and coordination must be attempted under pandemic conditions, much more the tried and true form of Joint Statements that reflect common assessments and goals of struggle, that contribute to coordinated action at the international level towards the benefit of the working class, of the peoples.
Elisaios  VAGENASMember of the CC  of the KKE andHead of the IRS of the CC of the KKE
(*) V.I. Lenin Collected Works, “What Is To Be Done? Burning Questions of Our Movement”, “Synchroni Epochi”, Volumne 6, pg. 22
Publicadas por Party of Communists USA a la/s 21:19