MK Odeh: No FM Will Change the Fact — The Settlements Were Built on Occupied Palestinian Land 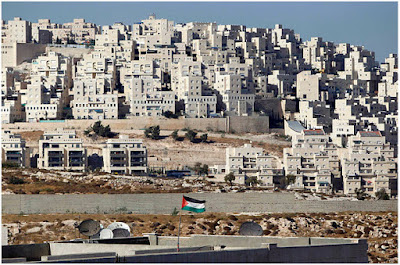 The American foreign minister, Secretary of State Mike Pompeo, announced on Monday, November 18, that the US is softening its position on Israeli settlements in the occupied West Bank.
Pompeo renounced a 1978 State Department legal opinion, known as the Hansell Memorandum, that held that civilian settlements in the occupied territories are “inconsistent with international law.” “Calling the establishment of civilian settlements inconsistent with international law has not advanced the cause of peace,” Pompeo said. “The hard truth is that there will never be a judicial resolution to the conflict, and arguments about who is right and who is wrong as a matter of international law will not bring peace.”
Pompeo’s announcement is the latest in a series of Trump administration moves that have weakened Palestinian claims to statehood and efforts to reach a negotiated including Trump’s decision to recognize Jerusalem as Israel’s capital, the movement of the US Embassy to that city and the closure of the Palestinian diplomatic office in Washington.
Monday’s move angered Palestinians and immediately put the US at odds with other nations working to end the conflict. Spokesman for Palestinian President Mahmoud Abbas, Nabil Abu Rdeneh, condemned Pompeo’s announcement and said settlements are illegal under International law. “The US administration has lost its credibility to play any future role in the peace process,” he said.
Secretary of the Palestine Liberation Organization (PLO) Executive Committee Saeb Erekat slammed the announcement by Pompeo, saying that the Trump administration has “completely lost all credibility and no longer has any role in the peace process,” the Jerusalem Post reported. Erekat stressed that the US administration has put itself on the side of extremist-settlers and is defending the private settlement interests of some of its own officials.
In a statement released to the press on Monday evening, Erakat called on the advisers of the US administration to review the provisions of international law and international humanitarian law, and said: “All the tools of international law condemn settlement, starting with Article 49 of the Fourth Geneva Convention, which prohibits the transfer of civilian population to the occupied territory, passing through The Rome Statute, which considers settlement as a war crime, the ICJ’s [International Court of Justice’s] advisory opinion, and the recent decision of the European Court of Justice, with its documented legal competencies, confirms this clear position of all instruments of international law regarding settlements, which is irrefutable or uncertain.
“The United States is looking at this and other positions in many areas and in various regions of the world, and is putting itself in direct defiance of international law and international will, and trying to undermine its pillars and replace it with the law of the jungle, and thus eliminates its role as a responsible international player and factor acceptable in solving international crises.”
Erekat called on the international community to respond to these illegal declarations. “Because this behavior poses a threat to international stability, the international community is required to address it, and hold the US administration accountable for these flagrant and continuing violations of international law and consensus, and the rumors that could lead to chaos and turmoil in the relations between the nations of the world.”
In Jordan, Foreign Minister Ayman Safadi said Israeli settlements in occupied Palestine were in breach of international law and international legitimacy, a measure that would kill the two-state solution and undermine chances for a comprehensive peace. Safadi, in a tweet on Monday evening, saud that the Kingdom’s position in condemning the settlements firmly fixed, warning of the seriousness of the change in the US position on the settlements and its implications for all efforts to achieve peace.
The international community overwhelmingly considers the settlements illegal. This is based in part on the Fourth Geneva Convention, which bars an occupying power from transferring parts of its own civilian population to occupied territory.
European Union foreign policy chief Federica Mogherini said in a statement on Monday night that the EU still believes that Israeli settlement activity in the occupied Palestinian territories is illegal under international law and reduces the chances of a lasting peace. “The EU calls on Israel to end all settlement activity in the light of its obligations as an occupying power,” said Mogherini.
“Israeli settlements in the occupied territories are illegal,” declared US Senator Bernie Sanders following the announcement by the US Secretary of State. “This is clear from international law and the various UN resolutions,” said Sanders, a leading candidate for the presidential nomination of the Democratic Party. “Once again, Trump is isolating the United States and undermining diplomacy, by appeasing his extremist base.” Just three years ago, in the final days of the Obama administration, the US allowed the UN Security Council to pass a resolution declaring the settlements a “flagrant violation” of international law.
Even though the latest US decision is largely symbolic, it could give a boost to Israeli Prime Minister Benjamin Netanyahu, who is fighting for his political survival after he was unable to form a coalition government following recent elections. The Netanyahu government was dealt a blow on settlements just last week when the European Court of Justice ruled products made in Israeli settlements must be labeled as such.
Hadash MK Ayman Odeh, head of the Joint List tweeted in response to Pompeo’s announcement Monday: “No foreign minister will change the fact that the settlements were built on occupied land on which an independent Palestinian state will be established alongside the State of Israel.”
Publicadas por Party of Communists USA a la/s 07:34 No hay comentarios.:


The uprising of our people did not start last month and made enormous sacrifices in pursuit of partial solutions or cosmetic reforms, but directly raised the goal of salvation from the existing system of governance, the power-sharing quota policy in all its forms and the rampant corruption. It has clearly declared that the time for comprehensive change has come, and that it is necessary to launch a new phase in the country's march and open up the way for the establishment of a state based on citizenship, true democracy and social justice.
After all the deliberate killings and the bloodshed in an unprecedented brutal and horrific manner, with hundreds of peaceful protesters and security forces injured, and campaigns of detention, kidnapping and forced ‘disappearance’, and after the support for the valiant people's uprising from various popular and social sections, as well as professional, trade union and religious organisations .. After all this, the peaceful protesters are adamant that there will be no return to what had existed prior to 1st October 2019.
We stress that any procrastination or delay by the Government, the Parliament and dominant ruling forces in complying with the demand for real change, will only inflict harm on our people and our country.
While noting that the Uprising, which is effectively an unparalleled popular referendum, has entered its 45th day with great momentum and vigour, and with great determination to achieve its objectives, we reiterate support for it by all peaceful means, and reaffirm the demands we already made:
A- To accomplish the immediate and urgent steps to secure the people's livelihood and satisfy their urgent needs, and implement the economic and social demands of the participants in the Uprising.
B- To bring just retribution to those who committed the crimes of killing the demonstrators and those who issued orders to them. To release all the ‘disappeared’, the detainees and the kidnapped, and to stop the campaigns of pusuing and harassing other participants in the Uprising.
C- To act on the cases of corruption, starting with the worst cases, to bring the corrupt to justice and recover the looted money.
D- To prepare for early elections provided that it is preceded by:
Upon completion of the above tasks and legislations, the Parliament must dissolve itself. The Government would then be a caretaker government. The constitutional amendments that need to be made will then be one of the first tasks of the new elected Parliament.
E- To restrict the possession of weapons by the State.
F- To preserve the sovereignty of the Iraqi state, ensure the independence of national decision-making and prevent external interference in its affairs.
Let us work diligently to sustain the momentum of the peaceful Uprising until its objectives, the goals of the people, have been fully realized.
Publicadas por Party of Communists USA a la/s 22:40 No hay comentarios.: