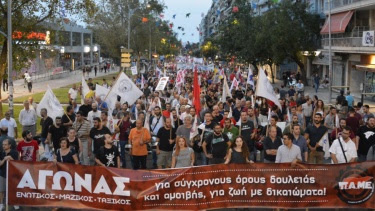 With the slogan : “Struggle for unity – mass – class, for modern working conditions and pay, for a life with rights”, thousands of working people, unemployed, self-employed, farmers  women and youth rallied on Saturday, 7th September at the All Workers Militant Front (PAME) demonstration at the Thessaloniki International Fair (TIF), directing a call for struggle to every working person for contemporary working conditions, for a life with rights.

Behind the banners of the Trade Unions, Federations and Labor Centers, protesters from Thessaloniki and surrounding prefectures, gave the first mass, united class answer to the anti-people attack of the government – the EU – capital, making it clear that “normalcy” is not the anti-labor upheavals the curtailment of labor rights, of trade union and popular freedom. It is not 'normalcy' for the country to be integrated in imperialist plans and competitions, which create dangerous conditions for our people and the peoples of the neighboring countries.
At the same time, they directed an open call for unity and action against the new plans that the ND government is readying.
A delegation of the CC of the KKE was at the rally, headed by the GS of the CC, Dimitris Koutsoumpas, who in his statement to the Press noted:
“Capitalist growth is neither beneficial for all, nor is it a given, due to the international environment, as is claimed  and alleged by the current Greek government.
All of them seek to 'drag the labor – popular movement behind the chariot of monopoly interests', so that they can serve the profits of the few at the expense of the interests of the many.
This why here and now we need a dynamic organization of labor – popular struggle, the development of class unity, a widening of the social, popular alliance, a change in the correlation of forces, so that the new anti-labor – anti-trade union laws will not pass, to abolish  previous laws that have brought the working class and the Greek people to their knees, to open the way so that we can live our lives as we really deserve to live them today.”
Publicadas por Party of Communists USA a la/s 09:22