Speech of D. Koutsoumpas in the School of Philosophy of the University of Athens 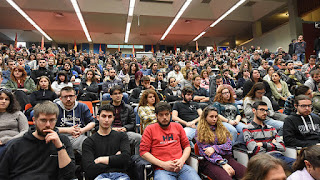 Young people have their own strength, their own voice. It is the Communist Party of Greece


On 3 April 2019, the GS of the CC of the KKE, Dimitris Koutsoumpas, visited the School of Philosophy of the University of Athens and spoke to the students, in the run up to the triple electoral battle of the local, regional and European elections which will be held on 26 May 2019.
In his speech, amongst other things, he stressed: "From here, the building of the School of Philosophy, we send a powerful message: Young people have their own strength, their own voice. It is the Communist Party of Greece. Because against the current, against the lowered level of demands, it struggles for the satisfaction of the contemporary needs of the youth. Because the activity of the KKE smashes the graveyard silence that the forces of the system want to impose, not only in the universities, but in the workplaces, people's neighbourhoods, schools. Because the KKE is consistent in words and deeds, which it confirms everyday with its specific activity and positions. It is consistently at the side of the oppressed, all the workers. Against the few that grow rich by "milking" the brains and the income of the many. Against the government of SYRIZA, which baptizes its anti-people political line as progressive. Against ND and the other parties of the system, which promising even more anti-people measures, are trying to regain the baton that SYRIZA today possesses (...)
The KKE has always struggled against the European Union, which is the common home of the European monopolies, but is a prison for the peoples of Europe. And this truth can now be recognized by even more young people, expressing their opposition to the EU, by saying a powerful YES to the KKE in every ballot. Because for the KKE, education is neither an opportunity nor a qualification nor a general and vague priority. It is above all a right and it is high time that it should be enjoyed by all young people without any financial barriers (...)
The revolutionary-communist ideology answers the contemporary needs of the ideological struggle inside the universities. In the struggle against the ideas of the rotten system that tries to identify the values of the youth with the values of the exploiters .(...) Then, no government on the terrain of capitalism and the EU, whatever it says, whoever it honours with its words and whatever the background of its members, can manage the system of exploitation and its written and unwritten iron laws in a pro-people way.(...)
Addressing an appeal to the youth to play a leading role in supporting the KKE in the local, regional elections and European elections, the GS of the CC of the KKE noted: "We have the positions, the theory, the experience in order to be able to bring to fruition what the youth need. To live in a world equal to the dreams of the people. Peaceful, without exploitation, poverty and wars. We address you, as always, with honesty and trust. Come and struggle together with us, to open up this road today. Building the alliance of the social forces, in the labour and more widely the people's movement, in the student movement. Against the current rotten system and the power of the few. For their final overthrow. The many ballot boxes in front of us must be transformed into many opportunities to impede the anti-people plans.
We must ruin their plans to implement the anti-people policies. There are many opportunities to persuade even more people to support the KKE, to say a big NO to the EU and big YES to their rights. It is an opportunity to elect more communist mayors, even more militants to the municipal and regional councils, who will struggle to impede the political line of the government and European Union. And we want you with us in this struggle.»

AKEL is in solidarity with the Palestinian people on Land Day

AKEL C.C. Press Office, 30 March 2019, Nicosia
On 30th March, the Palestinians honor Land Day by paying tribute to all those who struggled in 1976 with mass strikes and the organisation of mass popular demonstrations, all those who sacrificed their lives or were injured so that they could remain on their land against the illegal seizures of their land by the Israeli authorities and against illegal settlements.
With the support of the US and under the cover of impunity for the ongoing crimes it is committing against the Palestinian people, Israel is intensifying the occupation and oppression, expanding the illegal settlements, seizing the land and natural resources of Palestine. Since 30th March 2018, more than 250 Palestinians have lost their lives from the Israeli army’s gunfire in the weekly Return Marches.
AKEL denounces the US government both for recognising Jerusalem as the indivisible capital of Israel and for its recent recognition of the sovereignty of Israel in the occupied Syrian Golan Heights. These actions, besides constituting flagrant violations of international law and the relevant UN resolutions and decisions, are undermining the possibilities of establishing an independent Palestinian state on the 4th June 1967 borders with East Jerusalem as its capital, as well as the achievement of peace.
AKEL reaffirms its solidarity with the struggle of the Palestinian people for its land, against the illegal colonization, for the termination of the Israeli occupation, the establishment of its own state and for peace. This struggle is part of the common struggle of all those opposed to war, imperialist aggression, and the violation of human rights, of those struggling for international law to prevail.
Publicadas por Party of Communists USA a la/s 08:39 No hay comentarios.:

Dear Music Fans,
Music services like Spotify, SiriusXM, Pandora and Apple Music pay music creators for their work, yet there is exactly one music platform in the U.S. (actually, in the entire developed world) where the principle of fair pay for one’s work does not apply: broadcast radio.
Rather than changing with the times, Big Radio is doing everything they can to protect their competitive advantage and avoid paying music creators for their creative property the same way digital and streaming services do.
It's no wonder Big Radio is engaged in an all-out effort to get Members of Congress to sign onto the misnamed Local Radio Freedom Act (LRFA). Big Radio and their lobbyists in Washington are trying to get lawmakers to sign onto their bogus resolution in an attempt to block Congress from passing legislation that would allow music creators to be paid for their work in the future.
It’s time to prioritize hardworking music creators over big corporate interests.
Tell Congress to stop backing “Big Radio” and start making sure that music creators are paid fairly for their work.
Many Members of Congress have already added their names to this damaging resolution and need to hear from you, their constituents, so they can understand your disappointment. We would also appreciate it if you reached out to the Members who are supporting artists by not adding their name to LRFA.
Let your elected officials know that you stand with music creators.
Thanks,The musicFIRST CoalitionmusicFIRSTCoalition.org
Publicadas por Party of Communists USA a la/s 12:39 No hay comentarios.: